02/03/04 September… Barcelona emerged as the capital of world’s fashion at the fourth edition of this “real” fashion fair, the 080 Barcelona Fashion, which is now The catwalk show for new Catalan and international trends.

This edition, focused on increasing the commercial thrust of Catalan fashion, became a real bazaar where designers and firms sold their designs to the more than 150 buyers which signed up.  Deals were made in all languages.

The Catalan Government has had the plan to raise Barcelona’s game as an unmistakeable point of reference in the world of fashion and cutting-edge design ever since Bread&Butter left us to return to Berlin and the Pasarel.la Gaudi fiasco.  To obtain that medal, it has based its strategy on internationalisation, linking creativity and industry, financial support, backing emerging talent and the organisation of a mega fashion event in the city of Barcelona. 080 Barcelona Fashion is the answer to this last line of action.

The winner was Cardona Bonache, and not everyone considered the decision fair.  Critics spoke out about certain relationships between the firm and the jury spokesman, about a lack of quality in their fabrics and patterns in a poorly executed collection and accused the firm of being subsidized by the Catalan government.  Success for Cardona Bonache has so far been bittersweet.

However, the show must go on and Ungaro presented Estrella Archs as its new chief designer on September 9.  Now she is working on the 2010 spring-summer collection that will be launched in Paris on October 4.   Mounir Moufarrige, Ungaro President said about the Catalan designer “Her talent, her experience in the fashion business and her creative sophistication, have seduced me.”   The firm’s other big bet is appointing Lindsay Lohan as a new artistic consultant.

And of course… The Party

After the show and the awards ceremony, Barcelona also hosted the official party for 080 Barcelona Fashion.   Beautiful people: models, designers, actors and all that stuff, danced under the spell of Pete Best, the first Beatles’ drummer, and his group The Pete Best Band… a cult experience, at least for Jackson Browne who was entranced with the music. 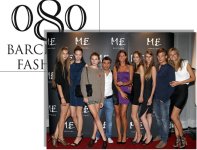 You could run into Clive Owen drinking Cava, Mario Testino in front of the camera, the musical producer Pino Sagliocco or Joan Laporta, President of FC Barcelona, both looking to score (a goal).

One thought on “080 barcelona fashion”